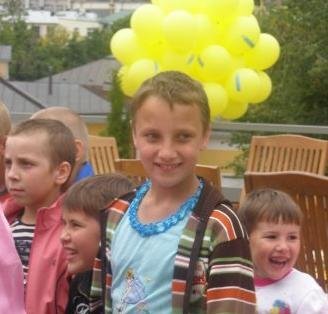 Two days in the holy month of Ramadan we spent together with the children from Salgany village orphan asylum (Nizhny Novgorod region). In those two days the children changed us. And we hope we managed to change them. When you go hand in hand, the flow of kindness and understanding quickens its pulse, usual words reveal their better sense and we start changing. Changing towards kindness.

“We are going to McDonald’s,” – saying that with importance to Gulnaz I was expecting the 10-years-old girl to start jumping with joy. But she wasn’t going to jump at all.  “What is McDonald’s?” – she asked me instead. Gulnaz had never seen the Red Square, a pink flamingo in the Zoo, never had a ride on a roller coaster and hadn’t even heard about McDonald’s. All these and many other things were on our two-days program. By the end of the first day, after visiting the Zoo, an entertainment park with lots of amusements to ride and the Grand Mosque of Moscow  the asylum teachers and us were ready to drop. But not our little guests.

The children must have a secret motor hidden somewhere inside which makes them scamper about Moscow from  morning to dusk without getting  tired, holding us by the hand. The children were taking us around anв not the vice versa.  The Red Square hadn’t ever seen such a united group of tourists before.

In the asylum they let them watch only children’s programs on TV, careful that they don’t see any indecent

programs or scenes of violence on the adults’ channels. They have had more than enough of all that in their real life. And in the children’s tellies there is no politics. But still… “Do you know who works there, over this wall?” – asks the guide pointing with his hand at the castellation Kremlin wall. “Putin,” – answers 11-years-old Boris. Everybody laughs – either at Boris’ answer or at the realities of Russian politics.

The view from Big Moskvoretski bridge is magnificent – towers and red stars of Kremlin, Cathedral of Christ the savior – all the attributes and symbols of state power. But the children notice a tiny white boat floating down Moskva-river. How nice it would be to go on that boat now. The children are all like that.

We tried to make at least one of their dreams come true. When some aliens landed right in an open air café with a beautiful view to the old part of Moscow’s Zamoskvorechye, it seemed that we succeeded in it. “Do they also keep Ramadan over here?” – the “aliens” were surprised. “Yes!” – the children yelled back with great joy.

In those two days they got a little acquainted with Islamic traditions. So that when Dinara Sadretdinova, host  of “Muslims” TV-program  started asking them questions about the Holy Book of Muslims, about their obligations and   the fasting time – no one was left out.  Everybody won in that game and all the children received  a satchel with a  school pack.

The “aliens” – artists from Sacramentum youth theater – turned out to be very funny people: they started a tug-of-war game,  racings around Arcadia shopping center (we hope the administration has forgiven us that one), various competitions and lotteries. The children’s joy went beyond all limits.

“And now we’ll write down our most secret wishes and let them fly up into the sky with these balloons,” – the aliens suggested. They didn’t need to offer it twice – the children immediately gathered around a table and started scribbling down their wishes – very diligently, as if during a lesson.

…Gulnaz offered me her note and asked me to fold it down nicely. “I want back home,” – was written in it. Are we helpless indeed to make this wish of the girl come true?..

“And who’s gonna read our wishes up there in the clouds? –  little Dinara suddenly asks. – The clouds can’t read.” We are at a loss how to respond to this childish inquisitiveness. “But there is God there! He will read them,” – Boris answers for us. The action “Let’s break the walls!” continues.

I was a participant of  “Let’s break the walls!” action organized by Solidarity Foundation.

I have enjoyed taking part in this event because I could see the happy faces of the children! During these two days we became good friends with almost all of the children and it was nice to see their smiles. I have become very much attached to them and it was so sad to part in the end. I hope there will be more such actions in the future, I would be delighted to take part in them.

In these two days every one of us was able to feel how urgent could be somebody’s need in our help, attention and care. For me personally I would say it was a great experience. An experience in organizing, and in communicating.

Thank Allah that we were brought up in nice problem-free families, that we could have enough love and care. My heart ached when I saw how grateful  these children were for our every one of our kind looks, for each handshake and a smile.

I believe we will have more and more of such actions and there will be more people involved in them. Because it’s absolutely essential, it’s a great thing which not only gives much joy to the children, making them happy, but it also makes us better, stronger,  more kindhearted and more united.

Getting presents is very pleasant, no less pleasant is giving them, but still more pleasant is to give them to such children as these. To see their happy faces, to hear their kind laughter. But we know it won’t be like that forever, so we want to give them all we can and right away.

I spent with them the last of the two days. In the morning, when they came to the café, I didn’t know how to come up to them. In the beginning they were shy, chatting among themselves, and I was very eager to get to know them all quickly. But after a while we became friends and then they wouldn’t let go of my hands any more. The children were all like one family – united, good friends, the elder ones responsible for the younger ones. You could easily see that the children were in good hands.

It was my first encounter with children who live in an orphans’ asylum. Such meetings are necessary for all of us, so that we don’t forget that not everybody lives in a warm homely environment, so that we get to think about those who haven’t got enough warmth and care. It’s an unforgettable experience when a child holds your hand in both his hands or hugs you. Anybody’s heart would melt down after that.

This action is an example of how to do good in our world.  In a sense it is a actualization of our ideas about kindness. To the children this action gave a feeling, in the first place, that somebody needs them. Because it is necessary for them to feel protected. And for me this action was an opportunity to meet people who want to make children’s life happier and who can do it.

Sometimes happiness goes hand in hand with trouble. It might sound strange but this time it was exactly the case. I spent only half a day contacting with the children.

But I will never forget little Elnara’s eyes. “Take us with you!” But I could not. She was snuggling up to me, hugging and kissing me and I realized that she was craving for  some warmth, tenderness and care. And I could have give000n all I’ve got to be able to give her that warmth, tenderness and care, because she doesn’t  even know that at that moment she makes me the happiest person  in the world. In that moment I understand why I live. Her troubles and misfortunes give sense to my  life,000 makes me move on in spite of all, in spite of any treacheries and difficulties, because somewhere far- far away there live Elnara, and Albina, Boris and Zhenya who don’t get the warmth of their mammies’ hands, to whom their moms won’t ever give a kiss before going to bed, as my mom used to always give me, and will never sing them a lullaby, never give them a hand if they get stuck or slip in their life.

But there are brothers and sisters who do not necessarily have to, and it is probably not even their duty, but they try to help them, to make their way if not without pits and bumps at least without bad falls, if not without pain, at least with understanding that it will pass, too. And there is me who probably doesn’t have to, and it is maybe not my duty at all, but I will always remember about all this.

In real life all kind of things can happen, but when you do good you do something bigger than just a good deed, you change “cosmos” because you give other people hope and strength. You give people strength, make them kind and they will surely give that kindness to somebody else, pass it further and further…

Some people might ask, why does Almighty try so small children? Actually He doesn’t try them, he tries us. In the hustle and bustle of everyday life, in our small talks and little affairs we forget about things that are really precious, forget how stars twinkle in the night and how no toy could distract us from the moonlight when we were small. In this race after more and more comfort and things we forget that one’s heart become hardened, it hardly ever reacts any more to a barefooted little boy next door, it rarely responds to other people’s pain. But Albina, Emil, Zhenya, Timur – we need them more than they need us. They have taught us to be grateful and they have taught us to value this life.

We thank very much all those who took part in the action “Let’s break the walls!” We believe that we have succeeded at least to shake a little this unassailable wall that has groun between the abandoned children and their rather well-off relations, between the poor and the rich, the renowned  and those who are nor so well  known.

They need your help

Where your donations were applied ›